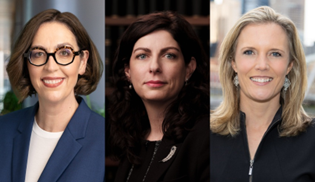 Whilst more women are being given leadership pathways within the profession, there are still systematic changes that need to be addressed, said these legal leaders.

Earlier this month, the 2021 Annual Profile of Solicitors in NSW was released, revealing a growing legal profession that’s increasingly made up of people from culturally diverse backgrounds, as well as a growing majority of women and younger practitioners.

But despite female solicitors outnumbering their male counterparts in the legal profession in NSW for the fifth consecutive year, the gender pay gap still exists across the profession.

Following the release of the report, Lawyers Weekly spoke to three female leaders from different legal firms and organisations on what more the profession can be doing to ensure women have a seat at the table.

Lander & Rogers chief people officer Catherine Whitehead said that these kinds of discussions are “more pervasive than ever before” — yet there are still systematic problems within the profession.

“While progress is being made, unwinding deeply institutionalised bias takes time, purpose, and continued commitment from law firms. More than half of those entering the legal profession are women, however, systemic workforce bias continues to play a role in dampening women’s progress towards leadership, even despite mounting evidence showing gender-diverse teams perform above average with positive financial benefits for firms,” she said.

“Unconscious bias is one of the most significant barriers to equality of any kind in the workplace and can result in unequal access to opportunities including professional development, promotion and pay. However, opportunity isn’t the only barrier. The traditional operating model of law firms isn’t particularly appealing to the modern professional who now not only seeks but demands greater flexibility and work/life balance.

“With women accounting for an estimated 60 per cent of lawyers entering the profession, gender diversity at a leadership level is critical for the future of the law. It’s well documented that diversity of all kinds has a positive impact on organisational performance and attractiveness, but the fact is employees are becoming far more discerning about their employers and high performers simply won’t tolerate exclusion or discrimination any longer.”

This issue is a “crucial” one for the legal industry moving forward, according to Women Lawyers Association NSW president Renée Bianchi, who said she was unimpressed with the slow-moving nature of change thus far.

“I think there are many systemic issues that are yet to be resolved — pay equity, parental leave policies, transparency around what is required to be promoted and to reach those senior leadership positions, billing models, sexual harassment and bullying,” she said.

“Whilst these issues have been known about, and talked about, for some time, cultural change has been slow.”

These systemic issues are a result of the law being a historically male-dominated profession, said Kalus Kenny Intelex partner Heather Richardson.

To enact change within the profession, firms need to make their female staff a priority in addition to having clear policies in place, added Ms Bianchi.

“[The profession should] really be making a change in how we do our business, and caring for our people. Ensuring there is transparency around what may be required for a role,” she said.

“Providing not only mentoring opportunities, but sponsorship, so that, particularly for women, there is someone opening doors for them, advocating for them, and supporting them to get into those senior leadership positions.”

A number of firms have implemented initiatives to develop more female legal leaders, with Lander & Rogers’ leadership development program to achieve a 40:40:20 ratio of women, men and candidates from either group in their promotion pipeline. Last month, 65 per cent of the 49 lawyers promoted were female, including five out of seven partners. The firm also has a 50 per cent female board, a female chief executive and chair and a female partner ratio of 47 per cent. Despite this, Ms Whitehead said the firm has continued to “stay vigilant” on issues such as gender pay equality, gender-neutral parental leave policies and flexible working practices.

“A true commitment to gender equality is much more than a series of independent initiatives — it should be systemic and designed to meet people’s day-to-day needs, when, where and however they’re working. We know that to embed and promote equality effectively in the workplace, we must have a sustained focus on all aspects of culture — our norms, values and shared sense of purpose and belonging. True equality isn’t simply about addressing symptoms of inequality but about helping people to thrive in their roles,” she said.

“It is prudent to acknowledge the added disadvantage to women when we factor in other aspects of diversity such as race or gender identity. Frameworks should consider how firms support intersectionality and create a safe and supportive environment for all people. Visibility, voice and representation have never been more important. Leadership involvement inclusion must be valued and visible at the very highest levels of firms for it to permeate culture and impact change.”

At Kalus Kenny Intelex, a number of firm staff work part-time — which Ms Richardson said was an “important step to encouraging all lawyers to continue to senior roles”.

“I am fortunate to be a partner at a firm where flexible work practices are the norm so it is difficult to speak for the profession more broadly. We have, and for a number of years have had, gender parity at partnership level. Indeed, most of our lawyers are women. Speaking more broadly, the legal profession is reflective of society as a whole. Many employers understand the importance of part time work and flexibility to retain talented employees. The legal profession is moving in the right direction. It will, however, take time for gender parity at senior levels.”

And whilst change will take time, Ms Whitehead said she was confident that the legal profession was “making inroads” to creating a more diverse and inclusive environment.

“There’s a greater awareness of the systemic inequality within the system, which is a start, but there’s also greater focus on actively addressing the factors that inhibit equality. In particular, there’s been a collective acknowledgement that sexual harassment is an issue in the profession that can no longer be tolerated, with industry bodies and firms acting to eliminate the behaviour to create a safer environment for women in particular. Hybrid working has also created new opportunities for those who require flexible arrangements, which is another step in the right direction,” she said.

“However, firms should have formal workforce management programs in place to avoid the risk of reverting to presenteeism in assessing performance and value, which could be particularly disadvantageous to those who require flexibility. It’s also important to acknowledge the need for social connection, team culture and collaboration to create opportunities for meaningful and challenging work to support people in progressing their careers. As a profession, we have learnt it’s not a weakness to show vulnerability and acknowledge the need to change.”